The Paths We Cross: Forty Years of Friendship 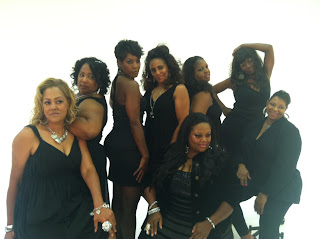 How many people come to your mind when you refer to 'your best friend?' Someone who knows all about you, but likes you anyway? (Yes, that was shamelessly stolen....)

This year I celebrated, along with dozens of my friends, our 50th birthday anniversaries. I attended, no less than twenty 50th birthday parties this year, including my own: my daughters threw me a surprise birthday party and I walked in to about 75 friends and relatives, who nearly gave me a heart attack. Lovely surprise though.

The women you see in the picture are simply your average women. We are mothers, wives, aunts and grandmothers. Some of us work at utility companies, some are self-employed, and still others sell insurance, work for the post office, teach and counsel.

We met in public school, became fast friends, dressed alike, and walked to school together. We joined clubs, argued over boys,and swapped clothes and shoes without our mother's knowledge. Some of us marched in the marching band, were cheerleaders, and some of us were high school basketball stars. We walked into the dances and parties together, dressed alike, celebrated spring fling events by wearing crazy hats and dressing in costume.

When we graduated, we took up entire pages writing in each others' yearbooks, swearing allegiance to stay in contact, not forseeing that though we temporarily moved away, thirty years later we'd all be back living just a few dozen miles away from each other.

But over the last forty years, we have been there for each other. We’ve celebrated birthdays, stood as bridesmaids in each others’ weddings, sat in the hospital lobbies when our parents became ill, and held each other and cried like babies when they passed away.

We’ve cooked for each other, planned baby showers, picked each other’s kids up from school, bought candy and cookies and cookie dough and that annoying christmas wrapping paper and attended our children’s games as they made the football team or their respective school cheerleading squads.

We were all there, fussing over prom dresses and threatening the dates as our daughters and sons attended their first dances, just as doting as the parents themselves who stood proudly by. As our kids grew older, we began to celebrate their achievements: their entry into a prestigious university, the police academy, a Rose Court princess, and one of them even had several speaking lines in an academy award-winning movie. Then came the college graduations, and then empty-nest syndrome.

We entered the third phase of our life as our children became parents. We began to retire or start another career. Some of us bought vacation homes. We learned how to ski, play golf and white water raft. Our musical tastes began to mellow. Our weekend trips became much more conservative, and though we still reminisced and giggled through the night, our turn-ins became much earlier.

Some of us suffered with life-threatening illnesses, so we kept vigils at the hospitals until they were released. There are more of us who could not make this photo shoot, but our love and our bonds are just as strong. It is both a blessing and a delight to get together and pick up where we left off, checking up on family members, other friends, and just laughing; so happy that our sisterhood is still tight.

Forty years after we met in elementary school, we are still standing. We are strong, we are beautiful. We are your average women who have suffered the storms of life with friends who have supported us through thick and thin. We are different Shades of Ebony and we will always be BFFs (best friends forever).
at November 29, 2011 No comments: